Indianapolis, IN (September 8, 2020) - American Legion posts from across Indiana have donated $50,000 for a planned expansion of the downtown Indianapolis memorial to the September 11th terrorist attacks.

That donation will be presented Friday, on the attacks' 19th anniversary, during an event at the memorial to kick off fundraising efforts for the $450,000 project. Donations for the expansion are tax-deductible and the project will receive no public funds. 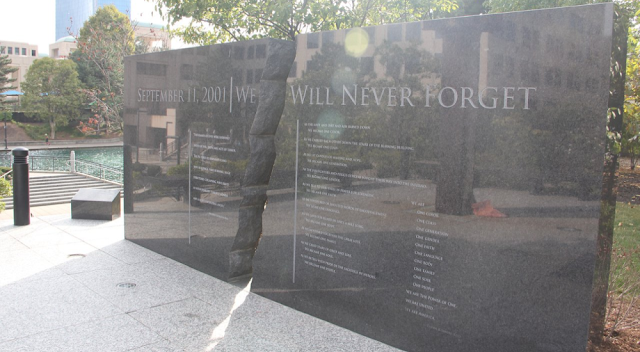 The decade-old Indiana 9/11 Memorial was dedicated to the first responders and people who perished in the attacks. It includes parts of two steel beams taken from the ruins of the World Trade Center.

The planned expansion will allow it to memorialize the more than 5,000 U.S. military service members who have died fighting terrorism in the past two decades. It will also honor U.S. Army Lt. Gen. Tim Maude, a Hoosier serving at the Pentagon who was the most senior service member killed that day.

In addition, the expansion will add an 800-pound piece of Indiana limestone from the Pentagon crash site and a “Survivor Tree” from the World Trade Center. The aim is to complete the expansion and re-dedicate the site on the attacks' 20th anniversary, on Sept. 11, 2021.
at September 08, 2020