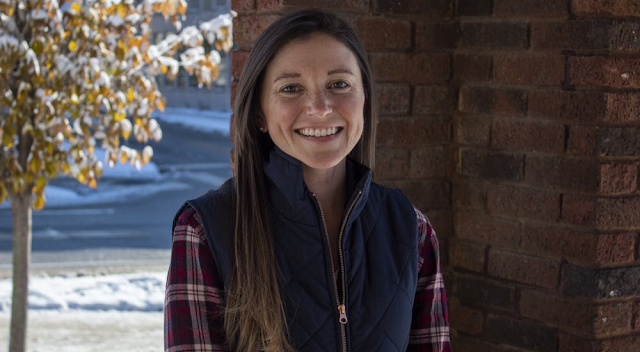 Sarah Bassett stands Nov. 12 on the front porch of the Center for Veteran and Military Students. Bassett is the new outreach coordinator for female veterans. IZZY MYSZAK

“We were really fortunate that they saw a need for women veterans to come together and support each other,” Bassett said.

Bassett works at the Center for Veteran and Military Students to mentor and connect women veterans with each other. She said she hopes to create a community where they can be vulnerable and express any struggles they face.

“The military mindset is ‘suck it up and drive on,’ and I want to break that down because in the civilian world, without the backing of the military, it can be a lot harder,” she said.

Bassett joined the U.S. Army in 2005, before graduating high school in 2006. She was first stationed in South Korea for a year. She then volunteered for deployment from Fort Bragg, North Carolina, to Iraq with the 82nd Airborne Division. After re-enlisting in 2008, she was later deployed from Hawaii to Afghanistan with the 25th Infantry Division.

Bassett graduated from IU last May with a bachelor’s degree in neuroscience. She said she frequently visited the Center for Veteran and Military Students during her time as a student, and it allowed her to meet other women veterans.

“When you walk into a room of male veterans, sometimes you don’t feel like you necessarily fit in,” she said. “Having other female veterans in the room made me feel like I belonged.”

John Summerlot, director of the center for veteran and military students, said one concern is that women veterans at IU graduate at a lower rate than their male counterparts.

“Our women veterans are not graduating at the same rate that male veterans are,” he said. “Sarah is researching the reason for that gap and seeing what we can do to fix this.”

Bassett meets with women veterans to address academic concerns or ways to adjust to college life.

“She’s been able to provide input to me about how we can ensure that our programs, outreach and efforts meet the needs of women veterans as much as male veterans,” Summerlot said.

Bassett serves as a source of information and guidance for women veterans. She said one of the challenges of connecting with these women is finding them.

“Sometimes women are less likely to identify as veterans because the world doesn’t really see them as a veteran,” Bassett said. “I’m just trying to reach out, and find them.”

Summerlot said Bassett’s role is important because she’s the first woman veteran on the center’s staff.

“Since we hired her, I have seen and interacted with more female veterans than I have in the last couple of years,” Summerlot said.