Arvin, CA (March 15, 2018) — They served our country fighting for our freedom and today locals gathered at the Bakersfield National Cemetery to pay their respects.

Today dozens gathered to pay their respects to nine members of the military, buried here at the Bakersfield National Cemetery, who weren’t given full military honors. That’s because these veterans were buried without any family to pay their respects. This morning that was corrected. “A lot of times the veterans pass away at the coroner’s office or somewhere where they have no family and what we do is provide them with their benefit of burial service but in the regards of having military honors not being present at the time of their burial,” said William Pickard, the director of the Bakersfield National Cemetery. 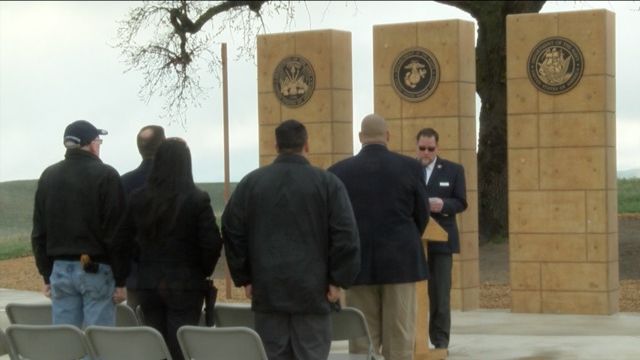 The cemetery holds this ceremony quarterly throughout the year to give everyone who served the dignified service they deserve. “It’s an honor and a privilege for me to be out here taking care of the veterans and their families, supporting the community here in Bakersfield. I’m a veteran myself and there’s nothing more I like to do than take care of my brothers and sisters in arms and their family members in their most important time of need,” said Pickard.

Don Kurtz is an army vet and has been a volunteer speaker at this ceremony for about 15 years. “All veterans deserve this honor, I’m the youngest of six boys and all of us served at one time or another,” said Don Kurtz, an Army vet. Kurtz says that every ceremony he’s done has been very meaningful for him…but one in particular was the most touching. “Only once have I ever completely choked up and that’s because I knew the recipient and the wife…knew her real well. I said her name and it was a minute or two before I could say another one,” said Kurtz.

And Kurtz says he plans to salute his fellow brothers and sisters one final time for as long as he can. “When it quits giving me feelings I quit,” said Kurtz.