Indianapolis, IN (November 20, 2018) — Five-time Verizon IndyCar Series champion Scott Dixon couldn’t find a parking space at Chip Ganassi Racing’s Indianapolis headquarters on Saturday afternoon. That’s because, for more than three hours, the facility was flooded with people who wanted to support a worthy cause while hearing from him and hopefully landing an autograph. 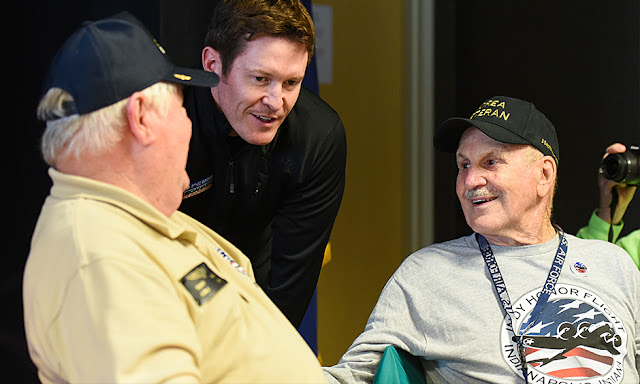 These people arrived early for an open house to benefit Indy Honor Flight, which transports military veterans free of charge to Washington, D.C., to see the war memorials. “Just trying to get into this today, the parking lots are full and I had to park down the street,” Dixon said after meeting with several veterans. “That’s a good sign, right?” One might think Dixon, who celebrated his fifth title with Ganassi this past season, would have his own parking spot by now. “I don’t even think Chip has a spot here,” he said with a smile. Dixon was honored to be part of this third Ganassi open house for Indy Honor Flight, which since its inaugural trip in 2012 has flown more than 2,200 veterans to the nation’s capital on 28 trips.

He conceded these veterans of World War II, the Korean War and Vietnam War were the guests of honor this day. One of the veterans Dixon met was Zeke Secor, 87, of Avon, Indiana. Secor was stationed at a U.S. Air Force base in Okinawa, Japan, during the Korean War. He’s made the trip to Washington twice, including last month. “It was awesome,” Secor said. “I can’t think of any other word. All of the monuments were great. I cried at all of them. I knew people from World War II. I was in Korea. And I had two brothers in Vietnam. All three monuments meant a lot to me.” Seated next to Secor at an autograph table was Harold Hodge, 90, of Brownsburg, Indiana.

The Korean War veteran made his first trip to D.C. in April. “I had never seen it before,” he said. “I think every veteran should see it. I think about the guys that didn’t come back. That’s the sorry part, and their families. You think about what the families lost. I just thank God that I got back.” Indy Honor Flight relies on these fundraisers to fully cover the cost of trips.

All staffers are volunteers. The Indianapolis hub is one of four in the state, the others in Fort Wayne, Lafayette and Evansville. More than 140 hubs nationwide have flown more than 200,000 veterans to see the memorials, according to Indy Honor Flight chairman Dale True. “The majority of our veterans don’t have a homecoming,” True said. “Most of them just come home, they give their mom a kiss, they shake their dad’s hand, they hang their uniforms up and they go back to work. 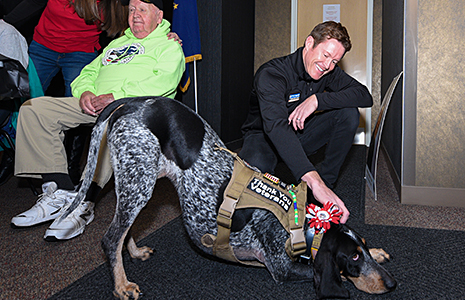 After enjoying that special day, veterans are given a homecoming reception from family and friends. “None of us would have the life that we have today,” True said, “if it weren’t for these men and women and the service they gave our country so many years ago.” True marveled at the immaculate Ganassi facility and joked that meals could be eaten off the floors. The front lobby had tables loaded with racing trophies. Dixon’s No. 9 PNC Bank Honda race car was there. So, too, was a Ford GT model car made of 45,000 Legos that weighed 89 pounds.

“I feel privileged to be a small part of it and hopefully we can raise some good money and get some more planes to D.C. to see the memorials,” Dixon said, “but it’s more about the atmosphere and this generation and these vets being able to talk about common things that they don’t often get to talk about. “Some of them just wanted to talk about racing and the experiences they’ve had at Indianapolis Motor Speedway. Some have been going since the ‘30s and ‘40s.

It’s something that gives them excitement. It’s something they look forward to. They can’t wait for the next time they’re maybe able to take the trip to D.C. It’s cool to see their eyes light up.” Anyone who served during war time in the three wars can apply online at indyhonorflight.org to be added to the waiting list.

Two more trips are scheduled for April and May. Two others who have made the flight were 98 years old, Vera Nuckols of Indianapolis and Pearl Donnelly of Avon. “It’s very special,” said Nuckols, who served in the Women’s Army Corps (WAC) during World War II as a mess hall sergeant in Arkansas and Georgia. “I was on the fourth flight years ago. I’ve been all for this ever since.” Donnelly, a WAC cook in Arkansas during World War II, was overcome with emotion when asked what her flight meant. “Everything,” she said, her voice cracking and tears forming. “The monuments are very special.”

The best part about being involved with these trips, True said, is seeing the veterans re-energized. “What we find is once they get out and have the experience of the trip, they realize there are people still out here who care about them, who respect their service and it kind of brings them back to life,” True said. “We see a whole new person coming back. They get to mingle with other war veterans and realize they’re not the only ones who are like that. It’s very heartwarming for us to see that reaction. “Everybody says it’s just a day trip, but I assure you, it’s much more than a trip.”