Group of veterans dedicated to helping other veterans

South Bend, IN (December 31, 2018) — A local veteran is warm and safe inside his Hamlet trailer this holiday thanks to a dedicated group of Army veterans. The Army Riders, a non-profit motorcycle group, aims to serve those who served. They help veterans in need. Now, one of those veterans is saying thanks.

After falling on hard times, Tom Tharp found help and hope in the Army Riders. 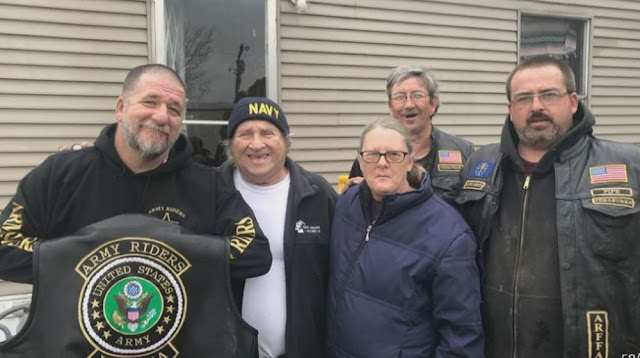 “We did this as a desperation thing,” says Tharp as he walks us around his Hamlet trailer, “I said I can fix it, I can fix that, but it was the unseen things that we ran into.”

Tom Tharp knew the trailer needed work when he bought it, but he didn't expect it would be this bad.
Moldy floors and walls, smoke detectors painted over, rotten floor boards, electricity issues, leaky pipes – that was just some of the issues that plagued his newly purchased trailer. Tom and his wife Debbie purchased the trailer after falling on hard times. Medical issues forced the couple to sell nearly everything they owned.

“Things were going really good and then they went down the tubes really quick,” says Tom. The past 3 years have been the hardest, he says.

Tom, who served in the Navy during Vietnam, tried to fix some of the issues himself. But, he knew he needed help.

“They came in stepped up and said what do you need done? We will do it,” says Debbie. The Army Riders are a group of veterans who are dedicated to helping other veterans.

“It doesn’t matter what branch they are in – it doesn’t have to be army – we help every branch if they area vet and need help we want to help them,” says Brandon “Gunn” Smith, the president of the Army Riders of Indiana.

Smith, or Gunn, has he likes to be called, served in Afghanistan. Now he is serving others through the Army Riders. Gunn is a welder and he combines his talents with the others in the group. Jeremy “Pipe” Gadsby was military police. Now he is a plumber.

“This is a family --every one of them. These guys will do anything for anybody. Especially anyone in the club,” says Gadsby, the Treasurer of the Army Riders of Indiana. The group has helped nearly a dozen vets this year, including the Tharps.

“Oh man, it was just amazing. It took so much pressure off both of us. It was just like, wow. This is unbelievable,” says Tom.

For Tom, the Army Riders fixed the plumbing and electricity, replaced the fridge, patched up and fixed the heating, and are in the process of replacing the front door. “It is not about me, it is about these guys. They are number one. They are my heroes,” says Tom.