A 42-year-old woman from Concord and a 62-year-old man from Contoocook were among the seven motorcyclists killed in a collision with a pick-up truck hauling a trailer in Randolph on Friday. 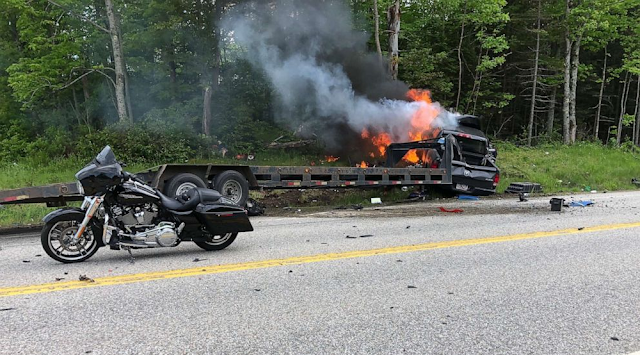 Desma Oakes of Concord was a supporter of the motorcycle group Marine JarHeads Motorcycle Club, Deputy Attorney General Jane Young said in a press conference Sunday. Michael Ferazzi of Contoocook was a member of the group, Young said.

Other New Hampshire bikers killed in the collision included Albert Mazza, 49, of Lee and Aaron Perry, 45 of Farmington. Daniel Pereira, 58, of Riverside, R.I. and a couple, Joanne and Edward Corr, both 58, of Lakeville, Mass. were also killed. Young said the Corrs were riding on the same motorcycle at the time of the crash.

Young said each of the bikers, all members or supporters of the JarHeads Motorcycle Club, died as a result of blunt trauma. Two other bikers were injured during the crash; Joshua Morin, 45 of Dalton, Mass., who is in stable condition at Maine Medical Center and Steven Lewis, 58 of Brimfield, Mass. who has since been released from an area hospital, Young said.

Law enforcement are still investigating the circumstances of the crash.

Authorities have identified the pickup driver as Volodoymyr Zhukovskyy, 23, an employee of a Springfield, Mass., company called Westfield Transport. Young would not say whether any charges have been filed against Zhukovskyy or whether he was injured in the crash. He did survive the crash, law enforcement said Friday.

“That is all the information that we can provide at this time,” Young said Sunday. “The investigation remains active and ongoing.” 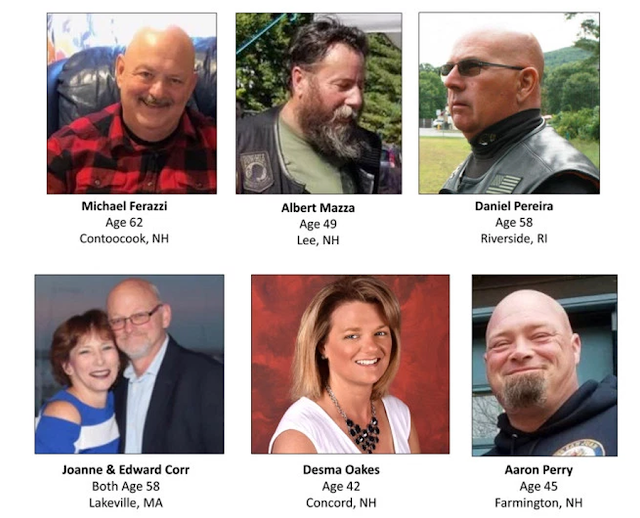 Zhukovskyy’s 2016 Dodge 2500 pickup truck towing a flatbed trailer of the kind used to haul cars collided with the bikers around 6:30 p.m. Friday on U.S. 2, a two-lane highway in Randolph, police said. Randolph is about a two-hour drive north of Concord, the capital, and a three-hour drive from Boston.

When the road reopened Saturday, skid marks were still visible on the road. Young said State Police, local and federal authorities were still at the scene of the crash Sunday afternoon.