The olive-green jacket traveled around the world

Greenwood, IN (June 10, 2019) VRI — Originally assigned to Bob Brunnemer while he was serving in Guam, Japan and China with the U.S. Marine Corps, it had come home with him to central Indiana in 1949. The coat had been stored away, eventually given to a neighbor child to serve as part of a Halloween costume.

Brunnemer never saw it again, until a man in Norway sent a photograph of it to Brunnemer's son, Bobby, hoping to find its true owner.

"It's amazing. How did this happen? Is someone smiling down on me?" Bobby Brunnemer said. "You always wonder about fate, 'what if?' The fact that I acknowledged the message, opened it up, it's amazing." 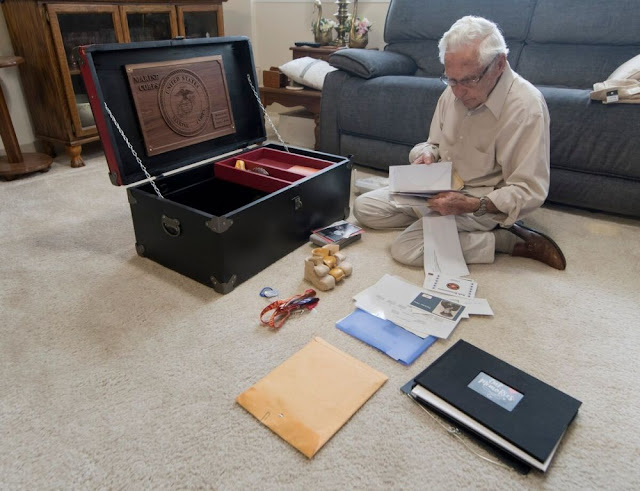 The intrepid research of that Norwegian man, Eirik Oftedal, will result in the jacket being returned to the U.S. Oftedal has restored the item, complete with military ribbons, patches and other insignias, and intends to mail it in time for Bob Brunnemer's 92nd birthday on July 6.

For Oftedal, being able to return the jacket is a small way to honor the veteran and all of the Marines who fought in World War II.

"It means very much for me to be able to re-unite the uniform to Mr. Brunnemer and his family. This uniform belongs to the Brunnemer family with all his history that I'm sure will be told to the next generations in the future," he said in a text message.

Bob Brunnemer grew up on the southside of Indianapolis, graduating from Southport High School. In April 1945, he enlisted for the Marine Corps. He was shipped to boot camp in North Carolina at Camp Lejuene, and spent three months in outdoor training in South Carolina.

By this time, World War II had essentially ended. But troops were still needed in the Pacific region, and Bob Brunnemer served in Guam, Japan and China, driving a 2 1/2-ton truck, pulling howitzers and transporting prisoners of war.

"I just did what they told me," Bob Brunnemer said. "I was all over the place with them."

He served for four years before returning to Indiana, where he worked for the William H. Block Co. He and his wife, Ginnie, have been married nearly 72 years, and live in Greenwood Village South.

Bob Brunnemer is still proud of his service. He has held on to a collection of items from his service. He kept his military ID and driver's license in his billfold until recently. His dog tags were on his keychain. He had his own footlocker, which had been given to him during basic training. He had kept the box the entire time he was in the military, and eventually, painted it green to give to his son as a toy box.

As a gift to his father, Bobby Brunnemer had the box restored and refinished by Wood Gallery in Indianapolis, with a carved wooden plaque inside bearing the Marine Corps logo. A padded tray allowed for a place to store medals and military documents from his service, photo albums and his old duffel bag from the Marines.

"I brought it home with me. You're not supposed to leave with them, but I did," Bob Brunnemer said. "He did a great job with it."

Bob Brunnemer's background connected with Oftedal, himself a military veteran. He serves in the Norwegian Army's royal guard, the Hans Majestet Kongens Garde. In addition, he is an enthusiastic collector of historic military items, specifically the World War II and Korean War eras. Foremost among the items he collects are those associated with the Marine Corps.

“It’s something special to have a piece of history like that in your hands,” he said. “(U.S. Marine Corps) items I think are the greatest with its history fighting some of the hardest battles around the world from Belleau Wood, Pacific islands, Chosin Reservoir and Fallujah.”

Oftedal found Brunnemer's jacket on eBay, coming from a seller in Canada. Though the jacket had no patches, he could see that it did have a name on it, and that there had been a diamond-shaped patch on the shoulder — like the kind the 1st Marine Division had worn.

He paid the seller $35 for the jacket, and when it arrived, went to work trying to track down who it had belonged to.

"This is what's really thrilling with (Marine Corps) items: They are often named and there are good records to find out what unit they were in and where they got deployed," he said.

Using genealogy websites such as Findagrave.com and Ancestry.com, Oftedal started researching. But it was a simple Google search that bore success. He found Bob Brunnemer’s Facebook page and sent a private message in the hopes that it was the right person.

The attempt was one-in-a-million, Oftedal said. But it turned out to be correct.

Bob Brunnemer was skeptical at first, wondering what this message was all about, but confirming that Robert Brunnemer was his father and that he was in the Marine Corps.

"I was suspicious at first. But as soon as I read it, it was obviously genuine," he said.

That started a months-long process as the two traded messages and information, with Oftedal explaining that he wanted to try to restore the old jacket.

Oftedal shared other interesting facts as he discovered more about the jacket. Inside the pockets, he found two old tickets to the Indiana Theater in downtown Indianapolis. Robert Brunnemer surmised that he had gone to the movies on dates with Ginnie.

Eventually, he offered to restore it and send it back to Bob Brunnemer as a gift.

"The uniform belongs to the (Marine) who earned himself the Eagle, Globe and Anchor," Oftedal said in a text exchange with Bobby Brunnemer.

Bobby Brunnemer was also able to piece together his father's memories about the jacket. As far as they can tell, he had allowed neighborhood kids to borrow some of his old military gear for Halloween costumes, and they must have forgotten to give them back.

The fact that it's coming back is unbelievable.

"It about blowed me over when he said they had it," Bob Brunnemer said.

After eight months, Oftedal has finished the jacket. He expects to have it sent to the U.S. in time for Bob Brunnemer's birthday. The entire experience has been very rewarding from his perspective, and he's happy to be able to connect with a veteran so far away.

“I’m very thankful to (Bobby) for taking his time helping me researching and asking his father when I had questions. I hope Mr. Brunnemer will have a super 92nd birthday and the uniform will get there in time for the celebration,” he said.