Indianapolis, Indiana, USA (January 31, 2020) VRI — Rep. Denny Zent, R-Angola, on Jan. 27 in the Statehouse presented a resolution urging the Indiana Department of Transportation to rename a section of U.S. 20 as the Indiana Medal of Honor Memorial Highway. 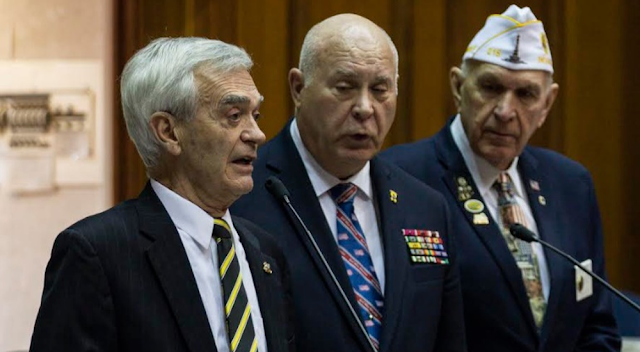 Rep. Denny Zent, R-Angola, left, on Jan. 27 presents a resolution urging the Indiana Department of Transportation to rename U.S. 20 in honor of Hoosier Medal of Honor recipients at the Statehouse in Indianapolis.

Zent, a U.S. Army and Air Force veteran who serves on the House Veterans Affairs and Public Safety Committee, said designating a national Medal of Honor Memorial Highway is a coordinated effort among the 12 states impacted by U.S. 20. The highway runs through the two counties Zent represents, nearly all of LaGrange and Steuben counties.

“We can never fully repay the debt owed to those who protected our state and nation,” Zent said. “Indiana is the Crossroads of America, and it is only fitting for us to join the other states from Oregon to Massachusetts in creating a national Medal of Honor Memorial Highway. By doing so, those who travel along the 163 miles of Hoosier roadway will be reminded of the freedom we have and the sacrifices made by these distinguished veterans.”

Since being established in 1861, more than 3,500 veterans have been given a Medal of Honor, with 100 of those service members from Indiana. To receive a Medal of Honor, military members must have distinguished themselves by personal acts of valor far beyond the call of duty.