HEROES AMONG US: Students organize fundraiser for veterans' nonprofit

Jeffersonville, IN, (March 20, 2018) VRI — Three years ago it would take everything John Wells had to muster the courage just to leave his St. Matthews home.

On Monday, the Vietnam War veteran stood before the Jeffersonville City Council — his faithful service dog, Johnny Cash, at his side — to lend support to an organization and an event close to his heart. 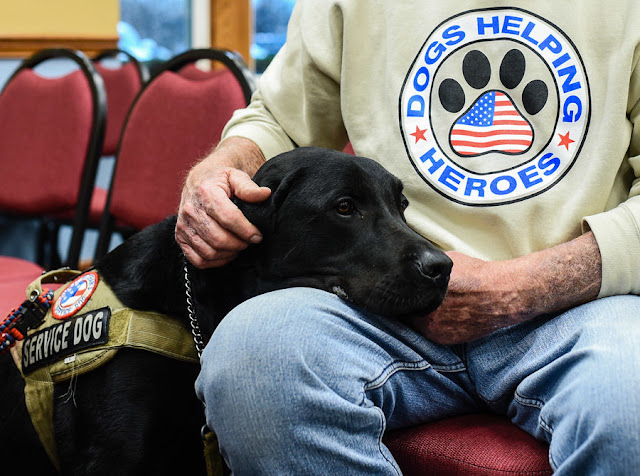 Johnny Cash rest his head on the lap of it's owner, John Wells, a Vietnam veteran suffering from PTSD

Wells was the second recipient of a service dog from Dogs Helping Heroes, a Clarksville, Indiana based nonprofit organization that pairs wounded military members and first responders, or "heroes," with service dogs.

"It's been a big change for me," Wells told the council. "It's just awesome what Dogs Helping Heroes has done for me."

"I wouldn't go out and do what I'm doing right now."

What Wells was doing was supporting a group of Southern Indiana high school students with Leadership Southern Indiana's NEXGEN program that has organized an inaugural dog walk at Big Four Station Park to raise awareness, and funds, for Dogs Helping Heroes. 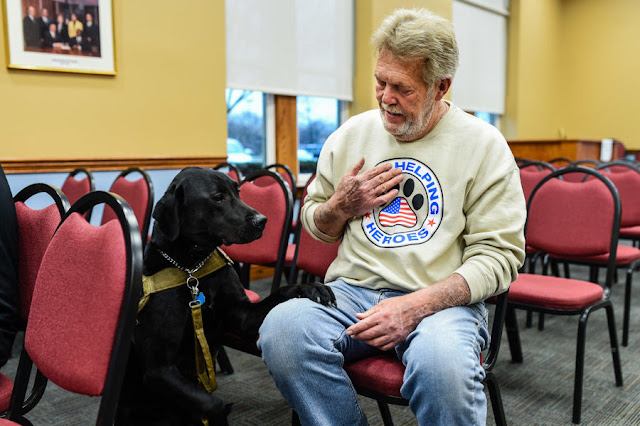 While the group was seeking financial support from the city for the dog walk, the bigger inspiration was to spread the word about the organization.

"It's just really to raise awareness, because not a lot of people know about it," Lauren Jacobs, 17, a junior at Jeffersonville High School, said before Monday's meeting. "This is a pretty awesome cause, and hopefully more people can know about it and become aware of it."

Council president Lisa Gill told the students that the council would take their request under advisement, and she thanked Wells for his service and for appearing before the council.

The goal of the April 7 event, which begins at 2 p.m., is to raise $40,000 to provide 10 heroes with a service dog. It's a big slice of the organization's overall fundraising goal of $80,000 that would provide 20 service dogs for veterans.

A service dog can cost as much as $30,000 — "a pretty hefty price for someone who has risked so much," Jacobs told the council — which is where Dogs Helping Heroes steps up. The organization uses rescue dogs, with inmates performing a portion of training, which significantly reduces expenses while providing veterans and first responders a service dog at no cost.

The veterans and first responders suffer from post-traumatic stress, traumatic brain injuries and physical disabilities, with many confined to their homes. Wells, who was diagnosed with post-traumatic stress disorder in 2003, and learned he has Parkinson's disease two years ago, was paired with Cash three years ago this May.

"I didn't go out much. I'm still having a hard time going out without Cash," said Wells, 70, who served in the 1st Marines Division. "I never go anywhere without Cash."

But there he was Monday, with Cash, and three high school students — Jacobs was joined by Nathan Eckert, 17, a junior at Silver Creek High School, and Adela Zimbro, 16, a junior at Charlestown High School — at his side.

David Benson, executive director of Dogs Helping Heroes, said when he first met Wells, the veteran was "literally a prisoner in his own home." Benson arrived late Monday only to find out that Wells stood front and center with his new friends.

"Normally John would have been like, 'I'm not going without you,'" Benson said. "He got up and spoke in front of everybody."

That's the point of Dogs Helping Heroes, and the April fundraising event — to give heroes the courage to stand up.

"What happens is these men and women, many of our heroes, just come back to life," Benson said. "They feel more confident, they feel more comfortable, their anxiety levels drop, because they have their battle buddy with them, they've got somebody to watch their back."

"Thank God I got him," he told the council, "because I wouldn't have made it another year."