Rensselaer, IN, (March 21, 2018) VRI — Members from the local Indiana chapter of the American Veterans Motorcycle Riders Association visited the Rensselaer Library on Monday, March 19. The group had arrived to deliver a donation check for the upcoming mobile Vietnam Memorial Wall event to the Jasper County Veterans Service Council.

One does not need to be an actual veteran to join the group, but they do need to be passionate about helping them. Paul "Pappy" Day, the chapter's Commander and an Army veteran of including Desert Storm, said that a member named Toby Stanley was largely responsible for making the donation happen. Stanley is notably not a veteran himself, but he wanted to help the cause after seeing information about the event in a newspaper. 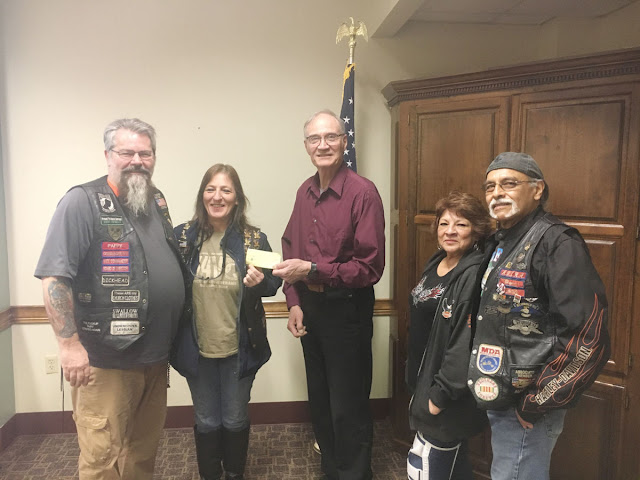 "We've done donations for the traveling wall before," Day said.

The check was delivered through Pat Donnelly, an assistant and former officer for the local Veterans Service Office. Donnelly said AVMRA member Gina Seitz had contacted him via email about making a donation.

"At the time, she said 'I know we'll have at least $220," Donnelly recalled, "which would have been a nice donation."

The group ultimately handed Donnelly a check for $1,220. He had only learned how high the amount was after the group arrived at the library and later joked about nearly fainting when he first heard the total.