More than 150 members of the 2ID/RUCD community varying in rank, position, and background met in observance of the event.

“This is a two-part celebration as we commemorate the U.S. victory in the Pacific, which ended World War II and the liberation of Korea from imperial Japan rule,” said Chaplain (Lt. Col.) Hyeonjoong Kim, 2ID/RUCD command chaplain and Seoul native. “We reflect on the spiritual fortitude of our Soldiers who made the ultimate sacrifice in support of the nations,” he added. 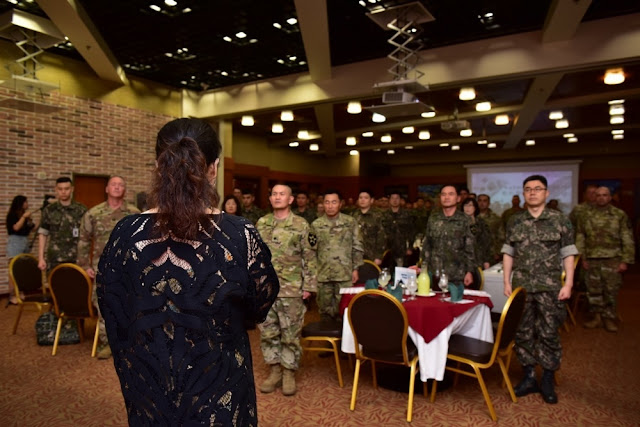 “There are two important days in your life: when you are born and when you discover the purpose of why you were born,” said Chaplain (Col.) Chul W. Kim, Eighth Army command chaplain and Seoul native.. “Everyone has a purpose in this life, it’s not random.”

Chul Kim spoke about how strengthening spiritual fitness can help Warriors focus their core beliefs to understand their identity, purpose, and sense of connection.

Chul Kim’s remarks resonated with Sgt. Nichole L. Olson, intel analyst and Beech Grove, Indiana native, who was inspired to attend future events as she enjoyed the communal atmosphere of the luncheon.

“It was altogether a wonderful time with the beautiful prayers, great music, and delicious Mexican food,” said Olson. “Loved the fact that it was open to both nations, regardless of religious denomination. Everyone can enjoy the luncheon and freely talk to their neighbors.”

After months of preparation, members of the 2ID/RUCD Unit Ministry Team agreed the event was a success.

“It was refreshing to see the immense involvement with this luncheon,” said Master Sgt. David M. Kress, a Cleveland native and religious affairs leader. “The Victory Prayer Luncheon was a testament of members of the Warrior community gathering and celebrating the division’s spiritual strength on a day fundamental in establishing ROK-U.S partnership on August 15, 1945.”

More than 73 years later, spirits are uplifted in reverence, song, and prayer as the bonds formed within the combined division flourish with the common goal of perennial peace on the Korean peninsula.