Indianapolis, IN (February 12, 2019) VRI —Too many veterans who fought the nation’s battles return home to face new battles. Monday, hundreds of former service members and supporters came to the Statehouse to urge lawmakers to be allies in that fight.

“Our men and women have volunteered their time and they’ve been sent over multiple times now,” said Indiana Veterans of Foreign Wars State Commander Eric Billman. “The government, both at the state and national level, they need to take care of our veterans because we did our part, and now they have to do their part and making sure that the funding is there, the programs are there, and help is there if it’s needed.” 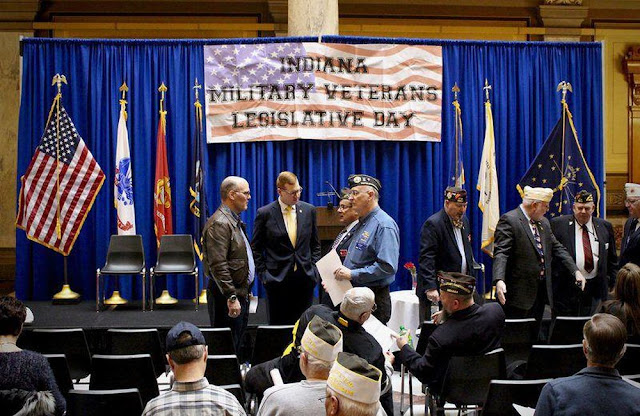 Judy Brown, an Army veteran from Columbus who served in the military from 1986 to '94 and again from 2007 to '12, including a tour of duty in Iraq, said veterans have four legislative priorities this year. They include:

• Property tax exemptions for veterans who are in the VA’s individual unemployability category and the spouses of service members killed in action. Veterans who are 100 percent disabled already received the exemption;

“The best part I can take out of my service is what I’m doing right now,” Brown said. “I love veterans. I was helping them over there and I’m helping them now.”

Monday’s event was the Fifth Annual Military Veterans’ Legislative Day at the Statehouse. Pam Smith, an Army veteran from Indianapolis who served as a dental assistant in Vietnam from 1970 to 1972, has come each year wondering if help was going to be given to vets, whether it be to help them find a job or owning a home.

Jake Skillett, owner of VonBernd K9 Training Center in Brownsburg, wasn’t enlisted, but was in Iraq training dogs to detect bombs. He said he’d been around veterans for most of his life and could see the problems they face.

“As hard as it was for the Vietnam boys coming home, you can definitely see a huge change in that regards as far as the support,” he said. “As a whole, it’s getting better every day and the support is slowly but surely becoming recognized.”

Billman, the VFW state commander, said the government has to do its part to help veterans adjust when they return home.

He said that while there are “several great bills” filed by lawmakers this session, he and others want to ensure those don’t get forgotten as the legislature deals with other issues.

“Unfortunately sometimes with the government, things can be buried which is what we are trying to avoid as well, so we can make sure our veterans are taking care of,” Billman said.