Indianapolis, IN, (March 24, 2018) VRI — Retired U.S. Army Major General Ronald E. Brooks, 80, died peacefully in his home with his family on Thursday, March 22nd. He was the last Commanding General of Fort Benjamin Harrison, Indiana. The City of Lawrence Government Center is named in his honor.

A husband, father and grandfather, he lived a life of duty, honor, and sacrifice for others and his country. Ron and his wife Drusilla (Muse) Brooks were married for 60 years, residents of Lawrence, and members of Sunnyside Road Baptist Church. 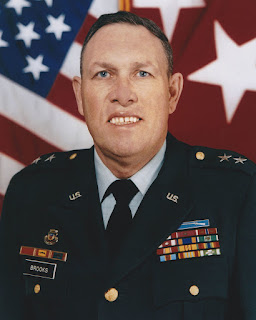 Ron Brooks graduated from East Tennessee State University (ETSU) having attended on a football scholarship. He was honored and named “Mr. ETSU” his senior year, and upon graduation was commissioned as a Second Lieutenant in the US Army. He later received an MBA at Butler University.

The son of a farmer, Ron loved growing vegetables and sharing them with friends and family. He liked telling stories about hunting and fishing trips, his latest military field exercise, or his largest tomatoes. But most of all, he enjoyed sharing stories about winning important battles on policy debates and strategic decisions that benefited the lives of soldiers.

He was promoted to Brigadier General in 1985 and subsequently served in a series of senior leadership roles developing and implementing critical wartime personnel management capabilities and essential support services for soldiers. In 1989, he was promoted to Major General and assumed duties as the Deputy Chief of Staff for Personnel, United States Army Europe and Seventh Army.

His military career culminated as the Commanding General, US Army Soldier Support Center at Fort Benjamin Harrison, IN; a post he took great pride in having served there multiple times throughout his career. In this capacity Brooks’ instrumental leadership and direction enabled mobilization successes during Operation Desert Storm and Operation Desert Shield.

General Brooks ended his last tour of active duty as the driving force behind the successful transition of Fort Harrison from an active duty Army post to a thriving civilian community. This enormous achievement spurred economic growth for the community of Lawrence, fostered the establishment and growth of residing US Army Reserve and Indiana National Guard units, and secured recreation and support services for military reservists, national guardsmen, military retirees and the local community.

After retiring from the military he continued to serve veterans in the National Headquarters of the American Legion as Executive Director, American Legion Marketing Services Group.