Beech Grove, IN, (April 4, 2018) VRI — Beech Grove residents and Indiana National Guardsmen Cliff Pappe and Aron Wetzel are providing spiritual support to members of the armed forces through their service with the 135th Chaplain Detachment, which was deployed to Kuwait in March. 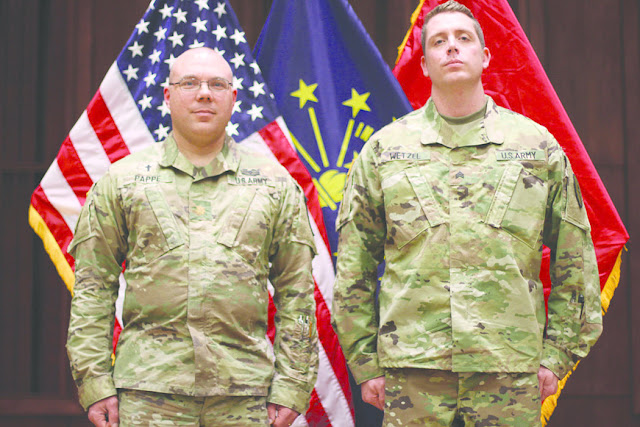 Maj. Pappe, a chaplain, and his assistant, Sgt. Wetzel, were deployed in support of Operation Spartan Shield.

“It’s a chance to serve soldiers and provide ministry to others,” said Pappe during his deployment ceremony at Stout Field on the West side. “We are not only representing our state and country, but also our community.”

Pappe said the 135th is the only Indiana Guard unit with its members from the same hometown.
He and Wetzel will provide religious support to thousands of troops.
​
Lt. Col. Jim Staggers, the Guard’s deputy chaplain, advised and reassured the two deploying soldiers during his speech.

“Use your time during this deployment well. Focus on what you have and what you can do. I don’t want you to ever forget who has your back. You’re Indiana National Guardsmen; we will always get you back; we will care for your families.”