The citizen soldiers are part of Task Force Spartan, and will be in command and control of more than 9,000 U.S. service members stationed across the Middle East to foster partnerships and to increase security and self-reliance throughout the region.

Training includes tasks such as physical fitness, weapons qualifications and resiliency training that will ensure the soldiers are proficient, agile, adaptable and lethal, according to a National Guard news release about the deployment. 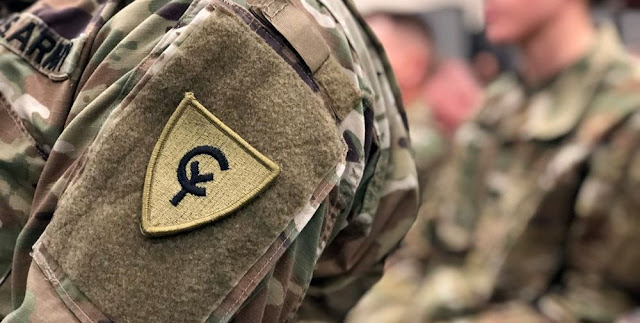 Fifteen percent, or about 90 members of the unit, are women; 570 of the soldiers are from Indiana, with the rest coming from 10 surrounding states.

The 38th Infantry Division expects to be deployed to in Kuwait’s Camp Arifjan for nine months. They will be sent off during a 10 a.m. ceremony on Sunday, May 26, at the Indianapolis Motor Speedway, before the start of the Indy 500.

What attracts men and women to the National Guard? Six of the 600 headed to Kuwait in a few weeks are profiled in this story. Interviews took place at the Camp Atterbury training grounds Wednesday afternoon.

Briana Keilly’s Indiana University class load will be lighter this next year, and she has put her Kappa Delta sorority membership on hold for now.

She’s on her way to Kuwait.

Her blond hair tucked into a camouflage patrol cap, the 21-year-old informatics major from Plainfield acknowledged that she may not be the typical soldier — or college student for that matter, although she said a sorority sister enlisted just last week.

Keilly joined the National Guard when she graduated from high school; her older sister had done the same. She deferred college for a year and focused on the Guard. Keilly isn’t fazed by the transition from a sorority house in bucolic Bloomington to dusty barracks in the Kuwaiti desert.

Being in the National Guard, “it made me grow up faster,” she said. When things go wrong and her college friends get overwrought, she provides perspective. “Life goes on, everything works out. I’ve learned a lot about that, facing things head-on and dealing with it.”

Her sister spent a year in Kosovo, so Keilly knew that deployment to the Middle East was possible. Her parents are behind her, she said, encouraging her independence. “I know they’ll miss me, but they are excited about the possibilities.”

After finals and before her training got under way, some sorority sisters took Keilly out to Big Woods to say goodbye. She’ll take a few online classes in Kuwait, and rejoin them on campus for her junior year.

From fast food to world travel

Casey Hamilton joined the National Guard 12 years ago after admitting that managing a fast food restaurant was not the career for her. The realization hit the 33-year-old Loogootee woman one night when a naked man appeared at the drive-through window at the Wendy’s where she worked.

“I saw it as a sign from God that I needed to do something else.”

She admitted being a “terrible student” in high school, with no interest in higher education. Her father, who had been in the military and served in the infantry in Iraq in 2003, helped convince her to find another path. “I weighed not doing something important with my life with worries about the military,” she said, and then went to the recruiting office in the southern Indiana town of Washington.

She now works as a safety professional at the Crane Naval Surface Warfare Center and is a senior at IU, where she had taken classes as a part-time student the past few years.

“I need to finish a couple of chemistry classes when I return,” she said.

She has deployed to Iraq, Afghanistan and in 2017, to Kosovo.

“I like to travel, and the Guard gave me the ability to do that. And you get paid,” she said. “I have 37 stamps on my passport. And my parents, they’re proud of me.”

Carrying on a tradition

Craig Davis is a sergeant with the Ellettsville Police Department. And a sergeant major in the National Guard, where he has served for 22 years.

Davis, who is 47, spent about a year in Iraq in 2008, and more recently was in Slovakia for training.

He and his wife, Kelly, have no kids still living at home, and they have become accustomed to hiking, Jeep rides and visiting wineries and breweries around the state.

But for the next nine months or so, she’s on her own — and understands the call, the tradition of military service.

“And both of my grandfathers were in World War II,” Davis added.

Missing a year of school

Martinsville High School government teacher Jonathan Marion is also a lieutenant colonel in the National Guard. He joined 27 years ago after completing the ROTC program at Purdue University.

This deployment will be his fourth — Marion was in Afghanistan in 2004 and 2012 and was sent to Iraq in 2008. This time, leaving is a bit easier since his two sons are in college now.

Being in the Guard for so long means he is acquainted with some of the other officers being deployed to Kuwait.

“It’s almost like getting the old band back together,” he said.

On the first day of high school classes in August, 49-year-old Marion will be thousands of miles from the classroom where he has been a teacher since 2001.

“It’s always exciting to start the new school year,” he said, and he will miss that.

But when he returns for the 2020-21 school year, there will be stories to tell students.

“The kids now, they were just babies when 9-11 happened and don’t know of a world before that,” he said. “Some of them are interested, and they are familiar, because the War on Terror has gone on for so long.”

Timothy Thombleson is a career National Guard soldier who has the distinguished title of brigadier general. He’s been in 35 years, ever since he enlisted as a 17-year-old high school senior. He is stationed at Stout Field in Indianapolis, and has lived in Martinsville since 1994.

The Guard paid his college expenses — it’s one of the perks — and he has a degree in marketing from Indiana State University.

When the now 52-year-old general was deployed to Kuwait and Iraq in 2003 and to Afghanistan in 2009, his wife Deedra, also a National Guard member, was in sole charge of their two children. His son was just 3 and his daughter a newborn when he left for Iraq.

“It was as hard as you can imagine to leave,” he said.

And when Deedra Thombleson was deployed to Iraq in 2005 and to Kuwait in 2012, it was the general who was left in charge of the kids.

“I took Josh to kindergarten, and Katie was in her terrible 2s that first time,” he recalled.

A lot of crayon drawings got sent to the Middle East during the Thomblesons’ deployments.

During more recent tours, Skype and FaceTime have eased the miles while off duty.

“But the value of a handwritten letter is great,” Gen. Thombleson said. “We have a chest we keep them in.”

This will be the third and final Middle East deployment for Indiana University administrator and National Guard Col. Kirk White, who served in Afghanistan from 2004 to 2005 and again from 2009 to 2010.

During his first Middle East tour, he emailed Craig Davis’s dad at the Ellettsville fire station about the lack of smoke detectors there; Davis boxed some up and mailed them right away.

White, 58 and from Bloomington, is leaving his wife and two daughters behind with a promise to be back in time for their graduations next spring, when one is graduating from high school and the other from college.

It seems like not that long ago that he was reading books into a recorder so his kids so could hear his voice while he was away.

Looking across the Camp Atterbury training grounds this week, White recalled the first time he was deployed.

“That building over there is where I said goodbye to Jan, Reagan and Jillian back in 2004. I go past there every day now out here, and I can see our Buick, Jan in the front seat with Reagan and Jill in the back in her car seat ... they’ve always been so strong. They get wet eyes, but don’t cry until I am gone.

“The goodbyes, that’s the difficult part.”